Worst software ever! do not use this software

This has got to be the worst experience I have ever had with any software!!! I Never had anything like this with CURA nor using octoprint. I wanted an all in one remote slicing, printing and view solution for my printer and thought this would be a good option. At first I did not go with 3DprinterOS since they did not offer support the Raspi Camera. When it was announced they did now I jumped at the chance to try it.
When using it at first i noticed it was not slicing,or something correctly and it took many tries of reslicing to get it working.
I was able to print one small test item successfully after slicing 4 times. I decided it was time to try a large STL and settled on the stupid duck that is offered as a test.
After trying many times it would not start properly and would heavily extrude ABS during brim process. So after a few failed attempts I decided stop and give it a break for the night. I was going to swap back to OCTOPRINT since it never messed up.
When I was leaving for work this morning i walked out and found this !!! Keep in mind i did not have a print running when I went to bed. It did this on its own!
This is a WHOLE almost NEW SPOOL OF ABS. The Z access is twisted, the Z motor is most likely destroyed and one of the set screws for the Z axis is now stripped! The plastic is completely hardened around the hotend and will have to be cut off. Most likely the hotend will need replacing also! 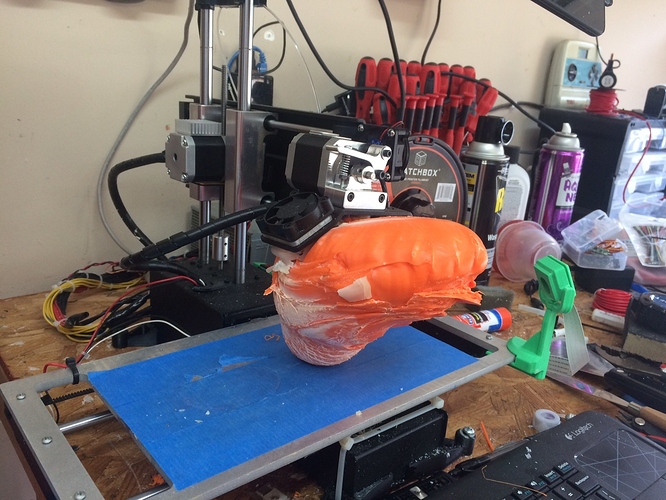 Please do not waste the investment of your printer and run the risk of $$$$$ damages on this POS software!

Well I can confirm the Z axis is totally screwed. Now that I have started removing the y Axis i can see the main frame is bent in a few spots. Also the y axis stepper and linear bearings seem to be damaged as well. It is VERY difficult to moves these manually. Also the hotend is completely encased in ABS, to make it worse the Plastic melted around the wires making extraction even more difficult.
Its been more than 11 hours since my first post and NO ONE from 3dprinteros has responded or made an attempt to contact me. This is a testament to their customer service or the lack there of. 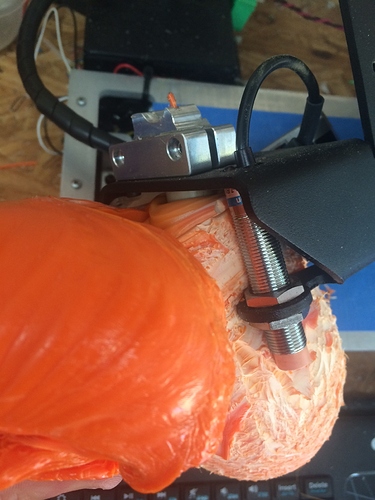 Hello Andy,
I am sorry to hear about the issues you have been having with 3DPrinterOS.
I would like to know what type of printer you are currently using, as 3DPrinterOS has different bed types for each printer. I a not sure why It sent it off the bed and stripped screws, as I have never had this kind of issue with it.
We have been working hard to have support for every type of printer possible, but It is hard to make every model of printer perfect. Any input you can give us is much appreciated as it improves our platform.

Printrbot simple metal with Heated bed. Based on what I can see the printer moved to center and started extruding. No other steps were performed on the X and Y. The damage goes beyond a stripped screw.

Alright, Do you have a copy of the GCode 3DPrinterOS produced? I would like to see what got sliced.